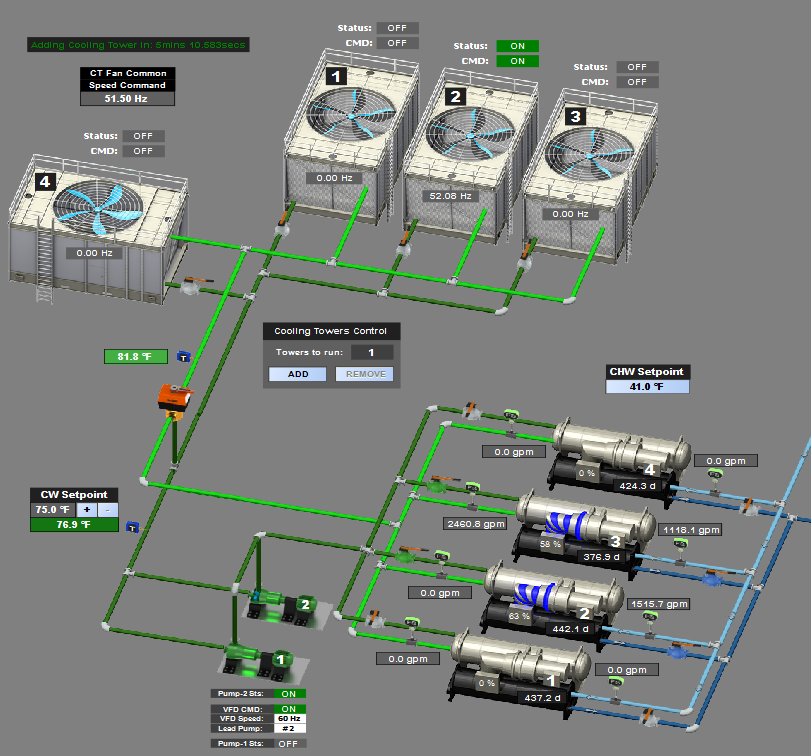 The Problem: Good Shepherd Medical Center was in need of an upgrade to their central chilled water plant. The original plant was a 2600 ton primary/secondary system consisting of one large McQuay Chiller and two smaller “swing” chillers, all of which had exceeded their useful life. The plant also was utilizing a dated Johnson Control system to manage the operations of the plant.

Replacement of the equipment and controls were complicated by the need to minimize downtime, as the hospital needed to maintain cooling over the course of the project, and by the tight space restrictions inside the plant.

The Solution: Storer Services worked with Good Shepherd and Aramark, who is responsible for facility operations, to design, install, and commission a new central plant for the hospital.

The new central plant was designed around four (4) 650 ton Trane Centrifugal chillers and included new pumps, VFDs, and Building Logix Niagara based controls. The design concept was for a variable primary flow system. However, due to time, cost, and space restrictions the hospital elected to not replace the existing piping. Because the existing piping was configured for a primary/secondary configuration, this was potentially problematic. The problem was resolved by installing VFDs on the primary pumps and modulating the speed based on flow rate through the de-couple bridge.

Legacy: The entire project was completed on time and in budget. Since completion of the project 16 months ago, Good Shepherd has seen a reduction of $220,275 in electrical consumption of the baseline energy spend from the old plant. Storer continues to work with Good Shepherd by providing preventative maintenance services and ongoing Connected Building Service support for plant operations.

Developing People, Leveraging Technology, and Building Processes that enable our Clients to reach their goals.

Our Connected Building Services Team is here to help!